Great afternoon at Rossendale Reveal open studios visiting Valley Artists, Prospect Studios and Fulbaechop. Lots of great work and the studios were filled with visitors. The studios, spread across the Rossendale Valley are open again tomorrow. The puppet festival is on at the Boo with lots of events for those young and old including the big metal whale as part of the Spot On Rural Touring Network’s Autumn Season.

Our girls, Florrie and Heidi are absolutely over the moon as they each sold a piece of artwork as part of Valley Artists exhibition “Postcards from Home”. Woohoo the treat’s on them! Meanwhile we treated ourselves to some wonderful prints by the extremely talented Alan Birch.

More details of the studios, spaces and events can be found at:     http://www.artsmap.org.uk/news/news-story/Rossendale-Artists-Open-Their-Studios 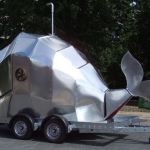